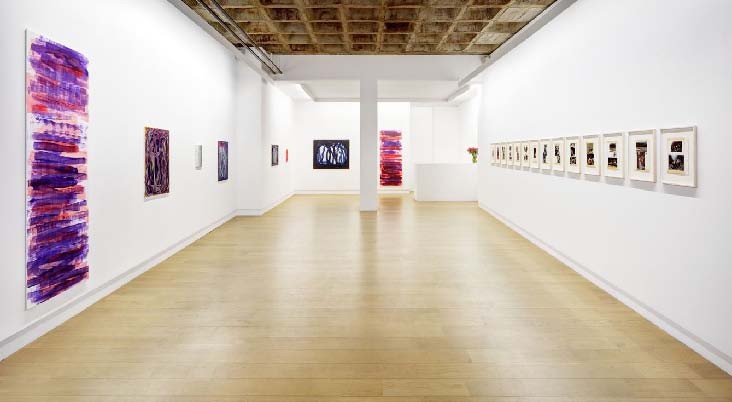 Mangroves grow in the salty or brackish water of tropical coasts. As the tide falls and rises, their roots surface from the swamps and disappear again. Roots and identity, knowledge and its loss, are recurring themes in Lizza May David’s painting, photography, and film.

Her photo series The Mangrove Selection is based on pictures taken by her stepfather, a photographer from a small German town, when he travelled Japan, Taiwan, and the Philippines in the 1970s. Before showing them in a small exhibition, he presented his pictures in the family’s photo shop and asked customers and friends to mark their favorites with colored paper dots. In David’s reworking, the album pages and paper dots hold the memory of how the photographer and his audience viewed and framed the unknown Filipinos. This not only reflects on how the perceptions of self and others interact in forming identity. It also raises the question of who, in fact, has the power to decide what is to be seen and what remains untold, and how regimes of knowledge production correlate with economic power relations in a globalized world.

David addresses the conditions of knowledge and its loss in painting as well. Often starting from not-quite knowing where it will take her, she works the canvas, its dimensions and shape. She circles the missing, the absent, the unknown, and reproduces margins until a center emerges. Quite literally then, her painting becomes „evidence of localized, embodied thought“*: a roll-your-sleeves-up engagement with knowledge and identity but from an individual, transnational perspective. Her paintings evoke images of art and nature that hover undecidedly between her Philippine origins and her European art education, juggling with Western and South East Asian imaginations of modernity. Modernist abstraction collides with painterly fantasies of exotic forests and with a local botanist’s fight for the preservation of species. David’s paintings are the look into the jungle and, at the same time, its looking back. They make it difficult to distinguish between visibility and opacity, bringing to the fore the gaze itself. Just as, if you had to bend down first to peek into a window, you’d become aware of your movement, allowing you to reflect on the act and, at best, on the conditions of your looking. Oona Lochner